What Makes a Song Bad? 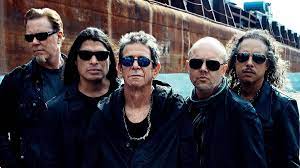 Lou Reed and Metallica teamed up to make an album that made Metal Machine Music sound like Pet Sounds in comparison to this disaster.

In music, everything is subjective. There is no right or wrong way to enjoy music. In fact, the music that you may not be a fan of may be someone else’s favorite song. That is what is so much fun about listening endless hours of it. Finding what works and what doesn’t. However, there are songs out there that are generally bad. So bad that the sheer mention of them would send shivers down someone’s spine and have the tune stuck in their head all day as a form of musical torture. Now what makes a song bad? That is what we are here to find out.

In picking out bad song writing, there are generally 6 characteristics in determining what makes music so unbearable to the listener. Not wanting to offend anyone’s taste, I’m going to pick a record that has been so critically lambasted, the artists who created it distanced themselves from it. The record is Lulu, an album based on a German expressionist play by Lou Reed and Metallica. The record was reviled by critics, disowned by fans, some of whom sent Lou Reed death threats.

Now what makes this record the musical equivalent to the arrival of the Anti-Christ? The six categories of bad taste are length, no hooks, no focus, no bridge, weak chorus, and poor arrangement. Now, let’s look at the song “The View” from that record. “I will cut my legs and tits off when I think of Boris Karloff.” That is the actual opening line to the song. Uplifting stuff you’ve written there Lou Reed.

The songs length is five and a half minutes, two minutes too long for a song like this. Its arrangement switches from acoustic to a singular monotonous heavy riff that chugs along throughout the song. The lyrics are largely spoken word, with what sounds like an attempt at a chorus from Metallica front man James Hetfield when repeats the phrase “I am The Table.” Lou Reed repeats it for what feels like an eternity, and it doesn’t feel like a big anthemic chorus, but rather something thrown in there to qualify this recordings existence as a song.

As for no hooks and no focus, this song has that in spades. Lou Reed essentially reads through the song like he’s reading from a book he found in his shelf somewhere. Rummaging through the lyrics, you can tell there is no repetitive structure to the song. No build up to the” I am The Table” line.  No hook to bring the audience back. For the bridge, it’s just these lines “For worship of someone who actively despises you.”  Just that phrase repeated twice as if on the recording he’s angry he can’t hear himself in the studio and tries it a second time with a different inflection.

In two paragraphs I managed to cover all 6 factors that make up a bad song. The rest of the album is structured very poorly as well. With the album being over 85 minutes, one might have found the pair covering old Velvet Underground tunes as a better way to pass the time. Check out or don’t Lou Reed and Metallica’s collaboration in the player below. Let me know in the comments as to what the worst song you ever heard in your life is.