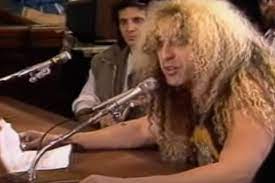 Dee Snider testifying before the PMRC.

The Rock and Roll Hall of Fame inducts musicians based solely on their impact on music and the legacy the band or artist leaves behind. This past weekend saw artists with lasting legacies inducted into the Rock Hall. While it is no secret that the Hall is notorious for avoiding heavy metal, there is a case to include certain bands. One band worthy of inclusion into the Hall is none other than Twisted Sister. The group known for hit singles “I Wanna Rock” and “We’re Not Gonna Take It” have been largely ignored by the Hall. Though if it weren’t for the legacy left behind by singer Dee Snider, the band would just be another one hit wonder from the 80’s

Known for their outrageous music videos played on MTV and headbanging anthems, Twisted Sister were the definitive hair metal band. Their music captured the attention of audiences who turned out to see them on MTV, in film, and even politics. In 1985, Tipper Gore, wife of Al Gore, stopped in to hear what music her daughter was listening to. She was disgusted to hear the song, Prince’s Darling Nikki, in all it’s offensive glory. Tipper decided that it was time to find a way to curb offensive speech in music and reduce exposure to explicit records. In 1985 the world was introduced to the PMRC.

The PMRC, or Parents Music Resource Center, was founded by Tipper Gore and wives of other politicians to help curb offensive music. Their goal was a simple one, to label recordings with stickers that would tell parents whether the content was explicit or not. In addition, the group came up with a list of songs they found to be truly offensive. They dubbed the list of heavy metal songs “The Filthy 15.” This included Twisted Sisters own “Under the Blade”, a song Dee Snider had written about a friend’s throat operation.

During the trials, it was initially assumed that Gore had the intention of banning explicit music altogether. Musicians such as Frank Zappa and John Denver arrived in Washington to testify against the PMRC. The most surprising of all was Dee Snider. He was brought in to testify because his song was on the list, as well as his looks and association with the metal community. No one in the PMRC thought Dee Snider could pull together a coherent argument. What happened next was one of the greatest moments in rock and roll history.

Despite his appearance, Snider came prepared and answered the questions confidently and respectfully. He even made an inference that Tipper Gore had a dirty mind when grossly misinterpreted “Under the Blades” lyrical content. The stickers made their way to the records, however it only enticed music fans to want to seek out the offensive content. Even today on Spotify and Apple Music, the E is there as a reminder of those hearings.

With Judas Priest having just gotten into the rock hall, maybe its time for the Rock Hall selection committee to include Snider. He helped publicly defend heavy metal and proved that despite appearances, some times a coherent argument is all that is needed to persuade people. 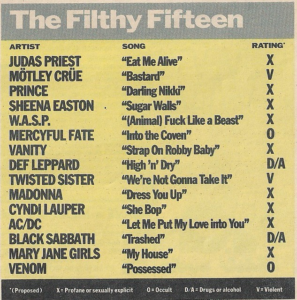