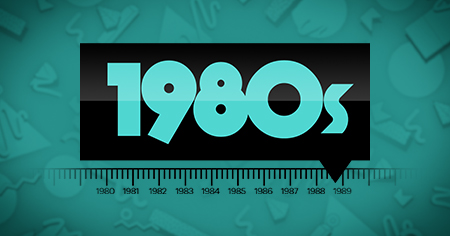 During the 60's, the music was inspired by the culture. In the 70's, the culture inspired the music. In the 1980's, it worked both ways. The bands and music helped influence the fashion of the time with the help of a little-known channel called MTV. Movies influenced artists to create their best known songs and artists created their best known movies as a vehicle for their music. Production techniques created in the 60's by The Beatles were employed to make some truly amazing and unique sounding records of the time. This is the 1980's.

In August 1981, an astronaut touched down on the moon and planted a flag for MTV. The iconic intro would become synonymous with the channel itself. The channel made it possible for artists to sell a hit song by its video alone. This proved to be true as Madonna, Michael Jackson, and Duran Duran belted out hit after hit in the 80's. It helped bring the emerging genre of rap to mainstream audiences through programs inspired by the artists.

For the emergence of rap music, it had largely been underground until the mid-80's with help from artists such as Run DMC and Tone-Loc. Other artists to emerge in this genre at the time included Salt-n-Pepa, Queen Latifah, and The Beastie Boys. Despite reaching mainstream audiences through MTV, the genre still had its share of controversies. The lyrical content of the songs generated a response that did not sit well with older listeners of the music.

Another way art and culture met in the 80's was when the PMRC convened to discuss the lyrical content of records of all genres. The group composed a list, dubbed The Filthy Fifteen, due to obscene and sexual lyrics. The goal was to ban this genre of music from being created. However, Twisted Sister front-man Dee Snyder proved in court the necessity for records of this genre. The result of the trial changed the culture of music forever when a parental guidance sticker was placed on records with obscene and filthy lyrics (known as Explicit on streaming services today).

Even movies recognized the importance of music and used songs in ways never done before. Movies like Risky Business, Say Anything and The Breakfast Club used needle drops to their advantage to attract a younger audience to the film, and to promote the artists music. The results showed in record sales of the individual artists and accompanying soundtrack albums. Artists wised up to this concept and made movies centered around their music. Prince with his smash hit Purple Rain acted as an extended music video for the record, albeit one with a larger more cinematic narrative.

As for the fashion, fans wanted to look like the rock and pop stars of the time. In Fast Times At Ridgemont High it was noted that three people emulated Pat Benatar's signature look. Long hair for men was in fashion due to the rise of hair bands at the time.

The 80's were truly a time for when culture and art coexisted with each other, making for a unique decade whose trends, fashion and music could never be repeated.